The Flat Left Wrist in the Golf Swing (Downswing)

A flat left wrist at the top of the backswing is evident in the techniques of many elite golfers.

From a full top of the backswing position, there needs to be an initial backward movement of the club head to bring it into proper position for the forward movement into the downswing, on plane, as illustrated in the following frame series.

Because the left wrist uncocks by about 30 degrees in the downswing; that action must be properly directed to ensure that the club head is brought down, on plane, to the appropriate setting of the wrists, hands and the club close into the lower body at the start of the sweep-thru-impact as shown in the following down view image.

Note the backward hinging of the left wrist

However; unless there is a correction to the setting of the wrists as the left wrist begins to uncock into the downswing, the club head will overshoot in the backward movement as shown in the next frame series.

That puts the club head under the swing plane and out of proper positioning for the start of the sweep-thru-impact with the club shaft angled back away from the target line as shown in the next down view image. 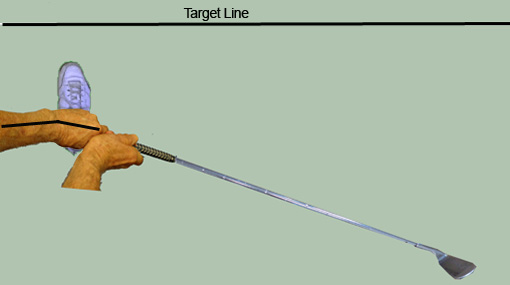 The club shaft can be brought to parallel the target line, with a flat left wrist, by eliminating the initial backward movement of the club head with an immediate forward movement on a steep downswing plane aimed directly at the ball as shown in the next frame series

However; that puts the hands too far forward, away from the lower body, to enable a properly executed sweep-thru-impact as shown in the next down view mage

Some elite players who adhere to the flat left wrist rule are able to recover from that situation by pulling their hands back into the lower body, along with an appropriate adjustment to the setting of the wrists to square the club face, as the sweep-thru-impact proceeds.

Alternatively; if the club is brought down directly from the top, as in the previous frame series, but on a steeper plane aimed at bringing the hands close into the lower body, at the start of the sweep-thru-impact, then the club face will be closed as shown in the next down view image

That situation requires manipulation by the wrists and hands in the sweep-thru-impact to square the club face or otherwise retardation of the club head is required to offset the effects of the closed face. The latter technique being that associated with the commonly espoused “hands ahead of the club head at impact” principle.

In summary: For a freewheeling sweep-thru-impact without need for manipulation, offsetting or otherwise compensation:

A flat left wrist at the top must be appropriately modified in the downswing so that the setting of the wrists and hands, at the start of the sweep-thru-impact, are the same as they were when addressing the ball, albeit at a 90 degree disposition, as illustrated in the first down view image at the top of the page.

The “hands ahead of the club head at impact” principle derives from snapshots of elite players at absolute impact showing a flat or forwardly bowed left wrist. That matter is discussed at The Flat Left Wrist in the Golf Swing (Impact) with explanation as to why a flat left wrist at impact should not be by manipulation

For a full discussion on important aspects of the golf swing (Basic concept, Dynamics, Weight shift, Rotation, etc.) go to A New Insight into the Golf Swing.