This golf swing concept is the basis of a technique in which the arms, wrists and hands control the club through two distinct (lower and upper) parts in smooth co-ordination with body rotation around a vertical axis. 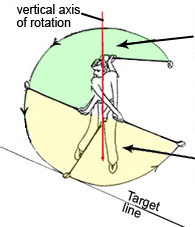 In the upper part the arms swing the club up and down (with wrist cocking on the inclined swing plane) in the backswing and downswing phases.

There is a definite transition between the two parts wherein the wrist cocking action changes from being on the inclined swing plane in the upper part to vertical in the lower part.

In the lower part the arms move the club through the takeaway and sweep-thru-impact phases (with vertical wrist cocking) in unison with the body rotation.


Although the follow-thru can be an indicator as to the way in which the sweep-thru-impact was executed, it has no effect on the outcome of a golf shot.  Therefore the follow-thru aspect is not included in this discussion.

Outcome is determined by the way in which the club is controlled during the sweep-thru-impact phase with the club and the wrist cocking action being contained within a vertical plane which is represented as being a virtual gate hinged to the vertical axis of rotation.

Although it is possible to perform a proper sweep-thru-impact from various combinations of ball address stance, takeaway, backswing and downswing actions; the performance is most effective and consistent when the set-up and takeaway are also contained within the virtual gate. 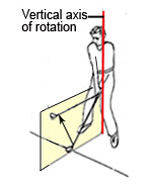 At ball address:The club is gripped with a standard overlapping or interlocking "vardon" formation.

That gripping method allows the wrists to cock uniformly when raising the club head vertically within the virtual gate with the club toe pointing straight up.

The club shaft extends straight out to the front from the vertical axis of rotation without setting the hands to incline the shaft towards the target.

In the takeaway: The arms turn with the body to bring the virtual gate back through 90 degrees around the vertical axis of rotation with wrist cocking contained within the virtual gate. 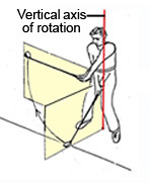 At the end of the takeaway the club shaft is horizontal and parallel to the target line with the toe of the club pointing straight up.

The vertical raising of the club to horizontal by wrist cocking within the turning virtual gate causes the club head to move back and up on the inclined swing plane.

The arms and hands keep the virtual gate hinged to the vertical axis of rotation. 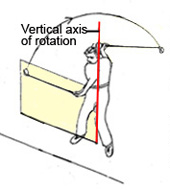 In the upper part: The arms swing up and back out of the virtual gate as the shoulders continue to turn bringing the club to above the outside of the right shoulder at the top of the backswing.

The wrists retain their setting as it was at the end of the takeaway as the cocking continues.

The downswing is essentially the reverse of the backswing with the arms dropping straight down while firmly holding the wrist cocking setting and without any conscious forward rotation of the forearms.

In the downswing:The club is brought into the virtual gate with its toe pointing straight up as it was at the end of the takeaway. 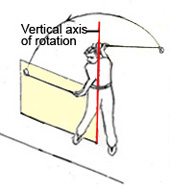 The wrists are then set for vertical uncocking within the virtual gate in the sweep-thru-impact.